Chapters of the Garbage Man 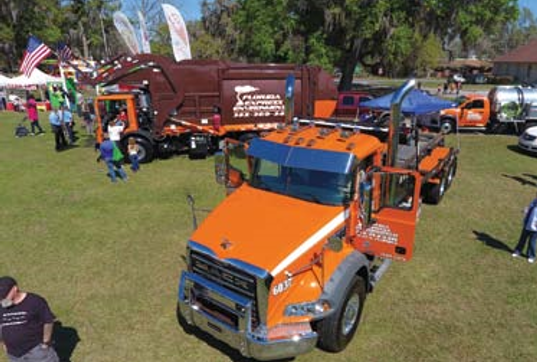 If you were to speak to any garbage man/woman with more than one day of experience, they would be able to share stories most of the general public would not even understand. We recently sponsored the Marion County Strawberry Festival and had a display booth with a new rolloff and front loader on display, along with a few VIP restroom trailers, service trucks and normal portable toilets. As the largest hauler in the county at the festival, it was very rewarding to meet our customers face to face. Many of them had a genuine interest in our trucks and how they operate. I was on hand for most of the festival, so it was nice to speak to these customers; when they soon realized how much I knew, my cover was blown and I would then introduce myself further than just my name and gave my title of General Manager/Owner.

With every question asked, there soon came a prompting of a story from my experiences, or they would share one of their earliest memories of a garbage truck and how it affected their lives growing up. Not one person in the crowd of thousands that passed by could even get close to guessing how much we paid for the trucks and what they cost to operate. To one gentleman who said paying over $300,000 for a front loader “wasn’t bad,” I quickly requested a check and we both laughed it off. The main point I was trying to make was that this brand new 2017 front loader (that arrived with a check engine light) does not do anything different than trucks of the 1970s, 1980s, or 1990s. The trucks of today still put trash from a dumpster into the truck, transports it to a disposal site and ejects the load. However, the cost has
almost tripled. What is different is the cost to purchase, operate, maintain, and deal with the electronic nightmares of new age trucks and emissions. He started the conversation in a joking manner and left humbled and with a different perspective of respect for what we do.

Many other people enjoyed a true behind the scenes look as well. We let anyone who wanted to climb inside, take photos and see all of the electronics. Many compared the controls to a “spaceship”; I wouldn’t venture that far, but I assured them that it’s not as complicated as they may think. In the crowd, I actually met a previous Mack truck engineer. I was very quick to let him know that, in my opinion, they should enlist experienced operators into their design team. By doing so, we also spoke about introducing the body manufacturers into the process as well to make sure all functions of design and accessibility from operator to manufacturer are incorporated into the future truck design. Just before I was approached, I had been flying the drone to record the crowd and take photos. He had seen me doing this, which initially started and ended our conversation. Will drones remove garbage and recycling one day? We both ventured to believe anything is possible at this point.

Life as a garbage man/woman is a commitment. Those that stick in this industry seem to be able to commit to being socially responsible. It is one of the few occupations where interactions between the business and customers can be on many levels. You could service that customer at their home, be referred to serve their business and, at the same time, be serving some of their closest contacts all along and no one ever knew. With this diverse customer base, it is very important to always put every customer first. Serving every customer with this mindset will allow you to grow a successful business that can be measured further than your profit margin. | WA

John Paglia, III is a 4th generation garbage man. Before he climbed the ranks to become Florida Express Environmental’ s (Ocala, FL) General Manager, he had a successful career in college and professional athletics. John has been around the garbage industry since his car seat days. Currently, John is focused on growing his company and offering the highest level of customer service and prolonging the world that we live in today. John wakes up every day knowing the impact professional haulers have on their community is far greater than most realize. He can be reached at (352) 629-4349, e-mail John3@ floridaexpress.us or visit www.floridaexpress.us.